With my GoPro actually charged this time I take a video of my ride south away from Mount Cook up to Twizel. The way back down somehow feels more relaxing than the ride yesterday. With the big mountains to my back, I amble alongside the lakeside and enjoy the cool morning air. It’s cloudy so the sun hasn’t yet had the opportunity to turn all my clothes into a sweaty sponge.

I fuel up in Twizel even though I still have plenty of range. One interesting thing about the fuel pumps out here is that you can start pumping gas immediately, no swiping a card or paying the cashier ahead of time. You grab it and go. But, there’s also no way to pay from outside, so you pump gas up front, and then are expected to go inside and pay afterwards. It doesn’t necessarily save time because you still need to go in and pay, but I get the distinct impression that people would attempt to exploit this method if it were used in the states. Also, the 3 fuel types are 91 Gasoline, 95 Gasoline, and Diesel, all going for something in the neighborhood of $2 per liter. Olga is really miserly on fuel, averaging somewhere around 30km/liter, which is around 80 MPG-ish. Food and drink are my largest operating expense.

Some time later I go through the Lindis Pass towards the town of Cromwell. It’s still mostly cloudy, so not quite as radiant looking as it could have been, but it’s a fun windy ride.

Beyond Lindis Pass, I travel down alongside the edge of Lake Dunstan, towards Cromwell. I didn’t focus as much on trying to stop and get pictures at every opportunity because there was more traffic on the roads, and not many safe places to pull off to the side for pictures. The lake was on my right with opposing traffic between me and it. Still, I managed to reach Cromwell and stopped for lunch at a cafe at the foot of the lake.

What’s on the menu? Whitebait. 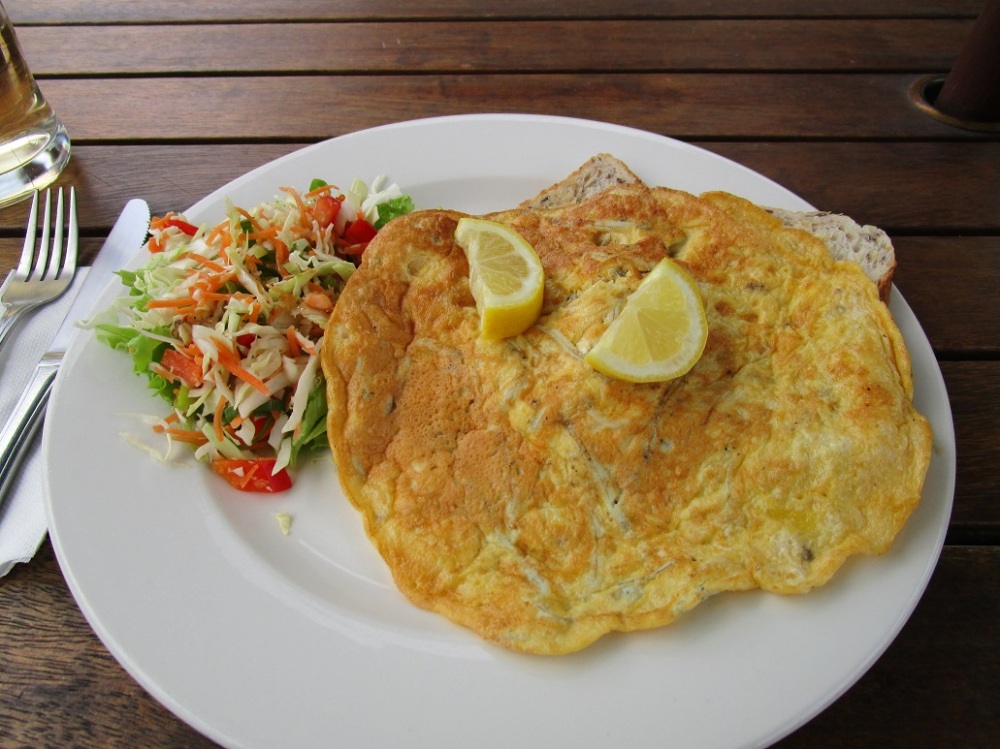 Whitebait are basically tiny little white fish, served here in an egg fritter/omelet over multi-grain bread with a side of coleslaw. It tastes mostly like, well, egg, but with a little bit of meaty fishiness to balance out the yolkyness. I take my time with my brunch and pass the time by studying the second leg of my route and watching some honeybees flutter about a squat, purple flowering shrub.

On the way out of Cromwell, I ride on a fun windy road that snakes along Kawarau Gorge. The river is fast, and the slopes to my side are dotted with barren, almost petrified looking trees. 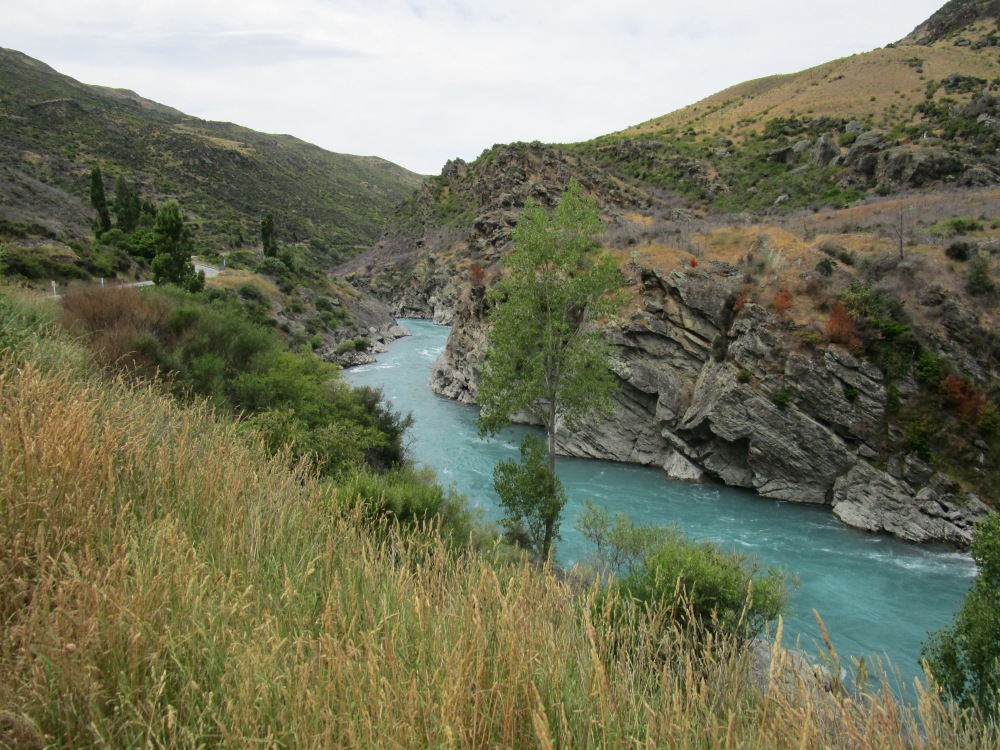 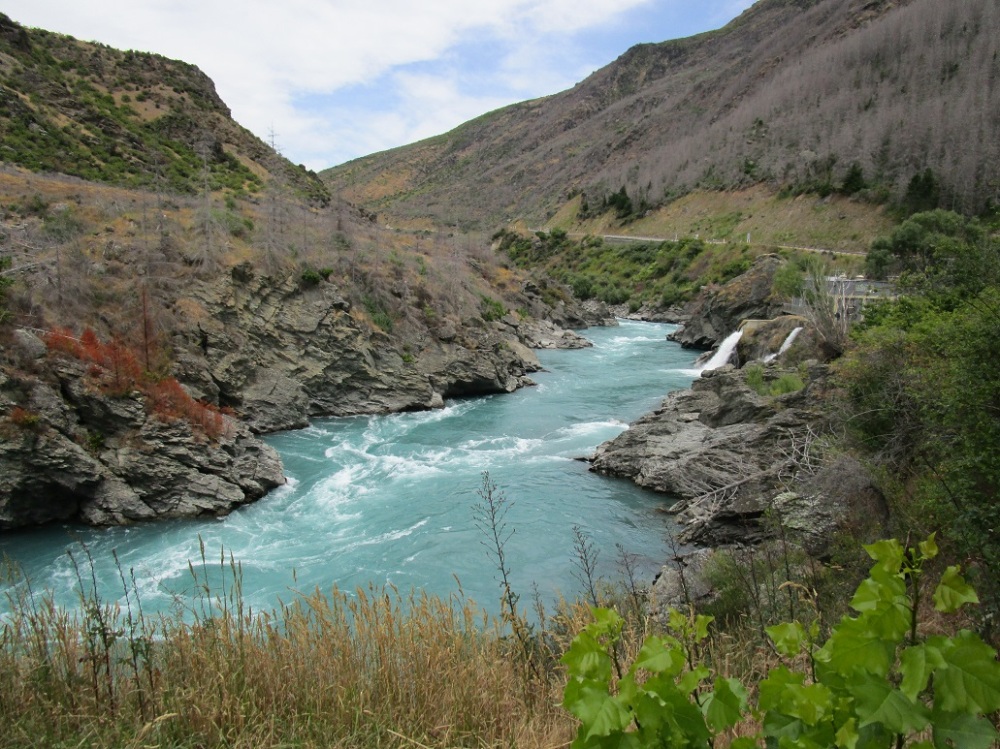 After carrying on for a while, I approach Queenstown. Rather than going into the city, my route today veers me down and to the south of it, along the coast of yet another long turquoise lake: Lake Wakatipu. 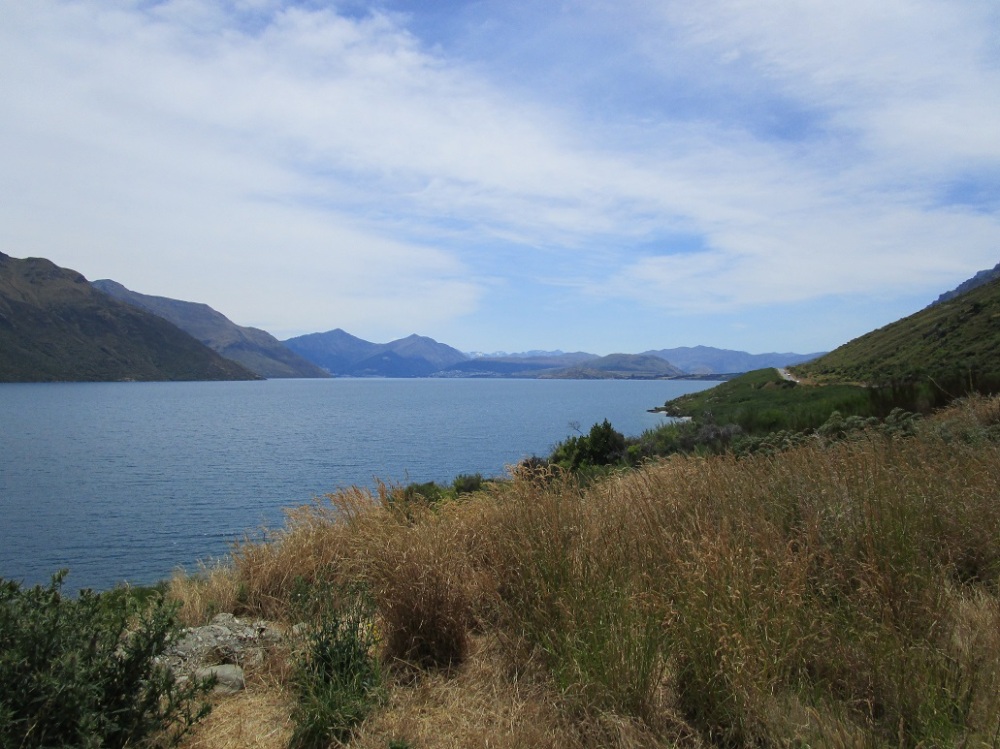 I also take some time to study the purple flowers that grow in abundant swaths along the roadside.

At the end of the lake, there is a tiny village called Kingstown. I take a slight detour off of the main road to reach the southernmost tip of the water. There I find a lonely forgotten dock at the edge of a derelict railroad.

I sally forth again after a little deliberate side-tracking. Hours in the saddle have caused long-ignored nerves to awaken and remind me that my ass isn’t getting bloodflow. I stop and get off the bike again at the Five Rivers Cafe where I turn onto SH97. I buy some quirky NZ lemon-soda stuff and half of a hot panini. The soda is delicious; Kind of like Sprite, but without the cloyingly sweet high-fructose-corn-syrup flavor.

The back patio of the cafe sits on the edge of a farm. A llama and a goat watch me eat while the wind howls through the air, trying desperately to liberate my napkin from my possession. A miniature pony ignores me, grazing on grass as if it was unaware that it was a complete genetic monstrosity.

The last leg of my journey, I have no pictures for. The wind continued to pick up, shifting from a stiff breeze to an absolute howling wind. It buffets me with weighty punches of air that quite literally blow me all over the road. Each gust hits hard, either as a shove to my chest that pushes me towards the shoulder, or a fierce uppercut that catches me under the chin and tries to yank my helmet clean off. The land is vast and open out here, with little terrain to slow the wind down. No matter which way the road weaves, it feels like the wind is trying to shove me to the left.

I take it slow, letting a few cars pass me as I travel well under the speed limit, just trying to stay on the pavement. It’s white knuckle for a good 30 minutes before the terrain thickens up again. It takes the edge off the wind and brings the gusts way down, but it’s still windy. By the time I reach Te Anau, my whole body hurts from a long day of riding and a final stretch of everything being tensed up. My clothes are absolutely drenched with sweat, trapped under the gear with nowhere to go. I end up trying to check in at the wrong hotel at first (apparently The Fijordlands Hotel/Motel is different from the Fijordlands Motel/Apartments), but I’m happy about that because my real hotel room is basically a sweet-ass apartment with a living room, kitchen and bedroom. The lady at the front desk checks me in and offers me a choice of “normal milk” or “trim milk”. Choosing normal milk, I get an ice cold 300ml bottle of what I’d describe as 2% milk. I down it quickly and immediately start to feel better. A hot shower and a change of clothes later, I’m human again.

Rather than go out for dinner, I keep it simple and buy a beer, some “Thai Sweet Chili” Doritos, and a Tomato, Egg, and Cheese sandwich from the market down the road. I do laundry. I charge everything, rip a pile of stuff to my tablet and write two long posts for the blog. It’s now 10PM and it’s still not really that dark outside.

Tomorrow, I have a simple route: A day trip to Milford Sound and back. Clocking in around half the total riding distance, I should have a lot more time to do activities, and hopefully I can get out on the water and get some great shots. It’ll be good to have a day like that.

Have a good night everyone, and thanks for reading!